The concept that macroscopic tumour stiffness arises from changes in the extracellular matrix (ECM) can be imposed from gathered research data. For example, collagen reorganization leads to an abnormally stiff collagen-enriched stroma. Also, measurements of tissue sections carried out by AFM show regions of higher and lower deformability attributed to stiffness of tumour cells and its environment, respectively. The formation of clinically detectable metastatic sites occurs at the end of stochastic events that allow cells located in the primary tumour site to detach, survive during transition to, and grow in the secondary tumour site. How non-numerous passing cancer cells colonize distant sites knowing that metastasis is a highly inefficient process remains obscure.

Cancer originates from a single genetically mutated cell capable of proliferating in an uncontrolled manner. To form metastasis, the cell first has to detach from the primary tumour site, to invade surrounding extracellular matrix and to pass to lymph or blood circulating systems. In the next steps, the cell extravasates and migrates through surrounding tissue to a site where it forms metastasis, i.e. it starts to proliferate again in an uncontrolled manner. Mechanically, cancerous cells pass through distinct, actively interacting environment. The last decade has delivered several technological and methodological realizations demonstrating that physical stimuli generated by the tumour environment affect cell behaviour and properties as profoundly as biochemical signalling. It has been demonstrated that matrix rigidity highly affects tissues homeostasis manifesting in variations in cell morphology, properties and behaviour. Various healthy cells like fibroblasts or endothelial cells or even stem cells alter their shape associated with remodelling of the actin cytoskeleton in response to the stiffness of the surrounding environment. We are trying to answer the question to what extent ECM mechanical properties guide cancer cells towards more migratory phenotype. 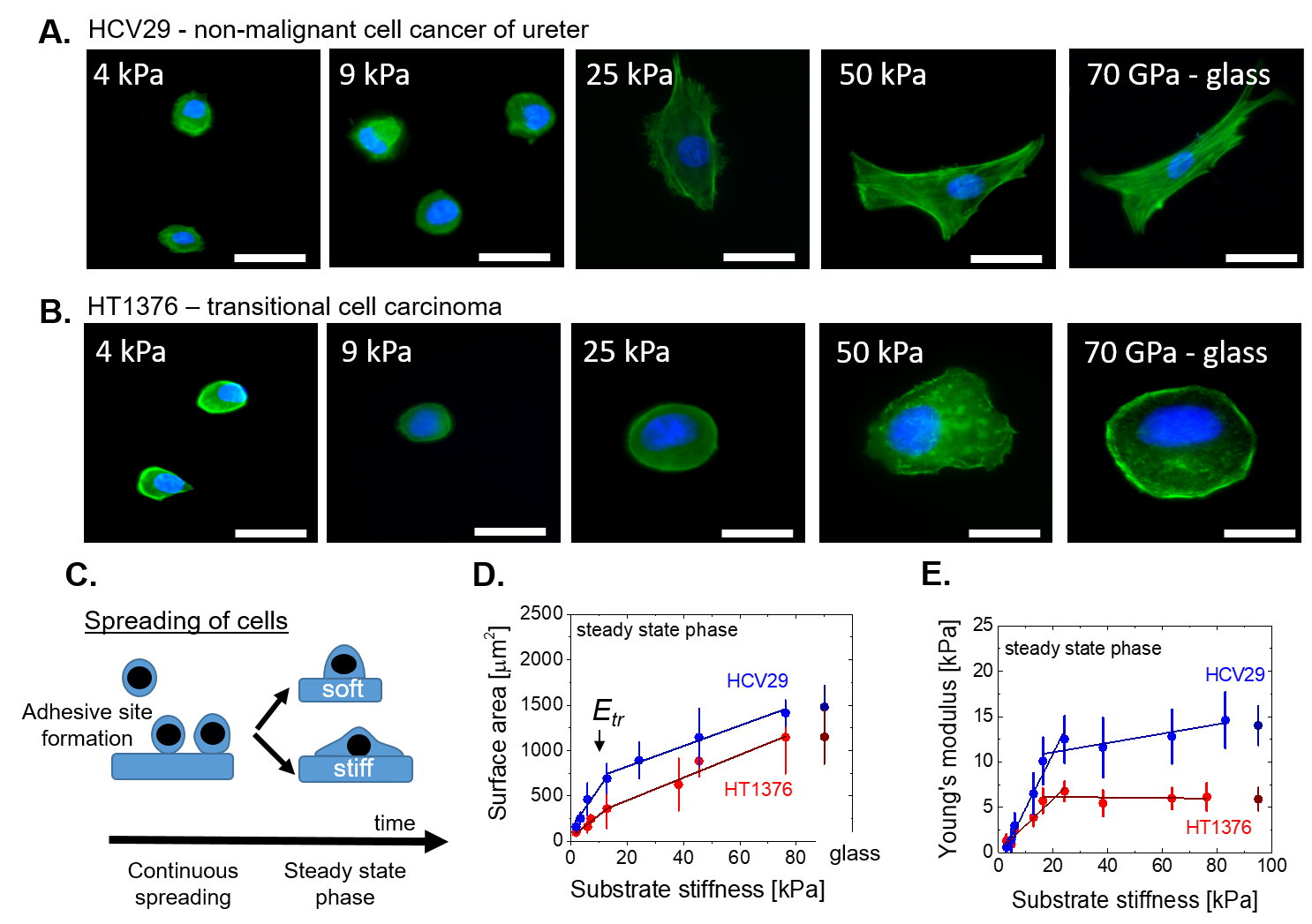 Cellular morphology observed for non-malignant HCV29 (A) and cancerous HT1376 (B) cells cultured on substrates with various stiffness. Images of F-actin were recorded after 24 hours of culture, i.e. in a steady state phase (C). Single-cell spreading area was determined and plotted as a function of substrate stiffness (D). The corresponding changes in cellular deformability describing single cell response to altered mechanical environment (E).

In our study, we demonstrated that morphological and mechanical alterations of bladder cancer cells in response to altered microenvironment stiffness are of biphasic nature. Threshold-dependent relations are induced by mechanical properties of cell microenvironment. Initially, fast alterations in cellular capability to spread and to deform are followed by slow-rate changes. A switch provided by cellular deformability threshold, in the case of non-malignant cells, triggers the formation of thick actin bundles accompanied by matured focal adhesions. For cancer cells, cell spreading and deformability thresholds switch between slow and fast rate of changes with weak reorganization of actin filaments and focal adhesions formation (Lekka et al. 2019).

The positions are financed within the project BioMechCanDet (the that will be realized under the Norwegian Financial Mechanism 2014-2021, NCN GRIEG).