Thanks to the possibility of measuring the unbinding force as a function of a loading rate, it is possible to study the dissociation of an individual molecular complex. Based on that, the energy landscape and parameters such as the position of the energy barrier, dissociation rate and lifetime of the complex can be obtained. These parameters are not accessible by other methods. 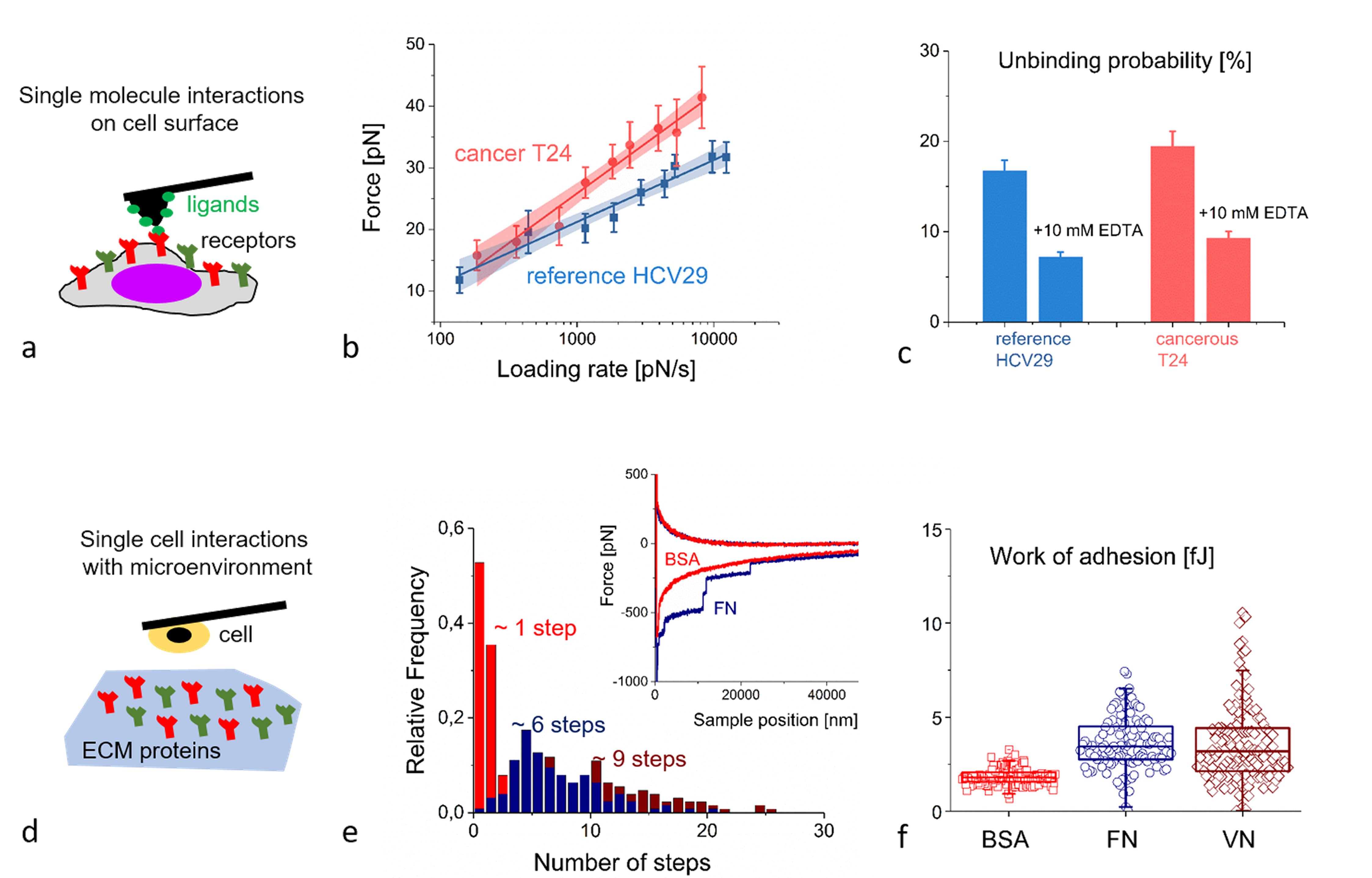 Exemplary results showing the AFM capability to quantify adhesiveness of cell surface (measured using CellHesion 200 head, JPK Instruments). The technique can be applied either to quantify the unbinding properties (a–c) of single receptor complexes embedded in the surface of living cells (monoclonal antibody against syndecan-4 present on a surface of reference and bladder cancer cells) or (d–f) single cells interacting with surrounding microenvironment (single reference HCV29 cell interacting with surfaces coated with BSA, FN, and VN). In the first case (b) the unbinding force plotted as a function of loading rate (describing how fast single molecular complexes unbind) delivers information on unbinding kinetics while (c) the unbinding probability is usually linked with receptor accessibility. The single-cell adhesion measurements can be quantified in two ways either (e) by counting the number of steps corresponding to subsequent unbinding of given receptor types or (f) by estimating the work of adhesion denoting the energy needed to detach a single cell from the studied microenvironment (Zemla et al. Sem. Cell Develop. Biol. 2017). Project was financed by NCN grant no UMO-2014/15/B/ST4/04737.

Force-induced unbinding can also be applied to study the properties of single molecular complexes directly on a surface of living cells. Another possibility is to quantify adhesion forces of a single cell either to various materials or to other cells. The latter approach is called single-cell force spectroscopy. In our research, we are interested in quantification of unbinding forces of both integrins and syndecans in normal and cancer cells.

The positions are financed within the project BioMechCanDet (the that will be realized under the Norwegian Financial Mechanism 2014-2021, NCN GRIEG).