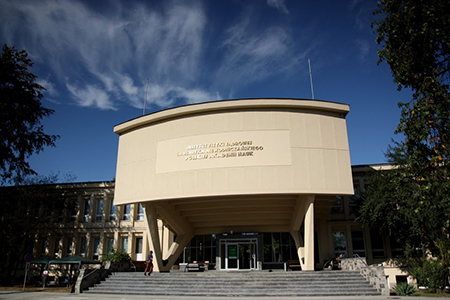 The Institute of Nuclear Physics was established in Kraków in 1955. The post-war excitement of engaging in scientific activity, exceptional in those times, can certainly be credited to the talent, experience and unusual personality of Professor Henryk Niewodniczański, the founder and first Director of the Institute. Historically, in the 60's the Institute's nuclear research activity was concentrated around the Russian U120 Cyclotron, built in 1958. This cyclotron provided beams of deuterons of energy up to 14.5 MeV and of alpha particles up to 29 MeV. A small 48 cm pole-piece cyclotron with was in-house designed and constructed, and used for many years to perform PIXE analyses and RBA material studies.

In 1960's, the nuclear spectroscopy group began building several types of magnetic beta ray spectrometers with the aim to study excited levels of neutron-deficient isotopes provided by the 660 MeV cyclotron of the Joint Institute for Nuclear Research in Dubna. In parallel, studies of spin polarization of neutrons and protons emitted in the deuteron stripping reaction were performed. Studies of condensed matter using neutron beams from the pulsed IBR30 reactor at Dubna and a mechanically bunched beam of the nuclear reactor at Kjeller (Norway) had also began. The Nuclear Magnetic Resonance signal was first observed in Poland by a group of physicists from the Jagiellonian University, and a well equipped NMR Laboratory was also created at the Institute. A small theoretical physics department was also established at the Institute to support experimental research.

Applied physics, based on the research performed in the Institute was also developed. Following the interest in fast neutron radiotherapy, initiated by the Gray Laboratory in Hammersmith, England, a beam of fast neutrons was produced on a Be target by 13.5 MeV deuterons from the U120 and applied for cancer therapy, in a collaborative effort with the Centre of Oncology in Krakow. Over a period of ten years, some 500 patients were treated, quite successfully in selected types of salivary gland cancer and post-mastectomy recurrences. In the late 60's an original technology of producing thermoluminescent dosimeters (TLD) was developed at the Institute, based on specially activated lithium fluoride. The method was patented and TLDs, manufactured at the IFJ, are nowadays routinely applied by dosimetry services and hospitals in over 30 countries. The Institute had an important role to play during and after the Chernobyl accident, by serving the population of Kraków and of Poland with accurate measurements of radioactive contamination of air, soil and food. This work is being continued, with a permanent early-warning and monitoring station at the Institute, an important element of the national radiation monitoring system. After 38 years of operation the U-120 cyclotron was decommissioned and replaced by an inhouse constructed 144 cm pole-piece AIC-144 isochronous cyclotron able to accelerate protons up to 60 MeV, which is now used to produce short-lived beta-plus isotopes and will be able to provide a proton beam for treating patients with ocular melanoma. The small 48-cm cyclotron was replaced by a 2.5 MeV pressurized Van de Graaff accelerator acquired from Strasbourg. With a microbeam capacity, it serves to continue and further develop the interdisciplinary research in cell biology, archeology and material structure.

The particle and high energy physics group, which joined the Institute in 1970, had originated from the Cosmic Ray Studies group initiated in 1938 by Professor Marian Mięsowicz at the Academy of Mining and Metallurgy in Kraków. The high energy physics group, initially connected with accelerators of the JINR at Dubna, was later able to successfully expand to CERN and DESY, becoming in the 80's and 90's one of the main streams of the Institute's research activities. The theoretical physics group had also expanded, engaging in particle theory and astrophysics. Our involvement in particle and high energy physics gave the Institute further international recognition and prestige. As a member state, Poland has joined the JINR in Dubna and the CERN Laboratory in Geneva. We take part in assembling the LHC, the largest collider in the world. We entered the ATLAS, ALICE, and LHCb collaborations and may possibly join the CASTOR project. We took part in constructing the HERA collider at DESY and are collaborators in the large ZEUS and H1 projects. We joined the TESLA project at its inception. Within the ZEUS collaboration we designed, constructed and built the luminosity detector based on registration of e-p bremsstrahlung. At the RHIC heavy ion collider we constructed a large part of the PHOBOS detector and within this collaboration we made an important contribution to the discovery of the new state of hadronic matter excited to high density which has a property of strongly absorbing jets. Within the BELLE collaboration at KEK (Tsukuba, Japan) we took part in the most accurate measurements of the CP violation effects in the decay of B mesons. Our scientists participate in experiments performed at GANIL, Legnaro and GSI. We carry out condensed matter physics experiments at the High Flux Reactor of The Laue Langevin Institute (not being a member state of ILL) and the ISIS spallation source at Rutherford-Appleton. Recently, we very actively entered the neutrino and dark matter collaborations: ICARUS and WARP at Gran Sasso, and T2K at J-PARC, Japan. We were also invited to the large PIERRE AUGER international collaboration which search for the highest energies in the Universe. Having close ties with CERN we are very actively engaged in CROSS-GRID, a large computer network project which will immensely increase our computing capability for data analysis in the future.