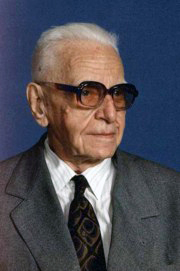 Professor Marian Mięsowicz was born in the city of Lvov on November 21, 1907, and died in Cracow on April 5, 1992.
He read Physics at the Jagiellonian University (UJ) in Cracow and graduated in 1930 with a PhD. degree for his thesis entitled "On Short and Slowly Damped Electromagnetic Waves". From 1931 he worked at the Department of Physics of the Mining Academy under Professor Mieczysław Jeżewski, and it was there he started his research on liquid crystals. His works on liquid crystals resulted in his Habilitation (D.Sc.) Thesis.

Under the Nazi occupation of Poland during WWII, Marian Mięsowicz was a teacher at the German-founded Mining Middle School in Cracow. He also lectured Physics for the students of the clandestine Jagiellonian University. In 1941-1946 he lectured at the Mining, Metallurgy and Surveying School. Since 1946 he was professor in the Mining Academy in Cracow (re-named in 1949 as The Academy of Mining and Metallurgy - AGH).

In 1959 Marian Mięsowicz was elected member of the Polish Academy of Sciences (PAN), of which he was vice-president in 1969-1977. In 1989 he was elected member of the resuscitated Polish Academy of Arts and Sciences (PAU). In 1972-1980 he was Member of Parliament of the Polish People's Republic. He was winner of several prestigious Polish prizes such as The State Prize of the First Degree (1964), The Special State Prize (1979), and The Alfred Jurzykowski Prize at New York City. He was awarded honorary doctoral degrees by the Jagiellonian University, University of Warsaw and the Academy of Mining and Metallurgy.
Professor Mięsowicz was supervised fifteen doctoral theses of his graduate students.

Marian Mięsowicz was one of the greatest Polish contemporary physicists. He was a pioneering specialist in physics of liquid crystals who discovered the anisotropy of the viscosity, and also defined and measured the viscosity coefficient for liquid crystal molecules in three directions respective to the flow and the velocity gradient. In the scientific literature these coefficients are known as the Miesowicz coefficients. Later, he worked out and introduced new research methods in three areas: nuclear physics applications, elementary particles and cosmic rays. The latter research, begun before WWII, involved measurements at large depths in the salt mines in Wieliczka in the late 1940s.

At the Academy of Mining and Metallurgy Professor Mięsowicz founded a division of high energy and elementary particle physics. In 1970 this division was fused with the Institute of Nuclear Physics (IFJ). In addition, stemming from the discussions with the Professor, a strong and scientifically active group of researchers was founded at the Jagiellonian University in the late 1950s that have since been working on theoretical high energy and elementary particle physics. Professor Mięsowicz was one of two most instrumental persons in starting the successful scientific collaboration of Polish high energy physicists with CERN in Geneva.

In memory of Professor Mięsowicz, in 1993 The Marian Mięsowicz Interdepartmental Centre of High Energy Physics (involving AGH, IFJ and UJ) has been established in Cracow. 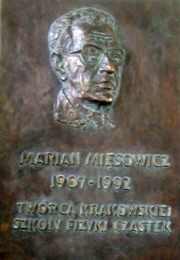 On Monday June 16, 2003 in the vestibule of the main building of the Institute of The Henryk Niewodniczański Institute of Nuclear Physics a memorial relief was unveiled in memory of the late Professor Marian Mięsowicz, the founder of the Cracow School of High Energy Physics.

The ceremony was opened by Professor Andrzej Budzanowski, Director of the Institute, who welcomed the members of the Professor Mięsowicz's family and the other eminent invited guests. He recalled various events from the life of Professor Mięsowicz in his young years at Lvov, the native city of the two Professors. Next, Professor Kazimierz Jeleń, the Dean of the Department of Nuclear Physics and Technology of the Academy of Mining and Metallurgy, highlighted the academic and scientific work of Professor Mięsowicz at the Academy of Mining and Metallurgy. Professor Roman Hołyński, in turn, spoke on behalf of a couple of generations of Professor Mięsowicz's students. Professor Hołyński stressed several vital characteristics of the Professor: his great scientific intuition, his ability to gather and lead excellent research teams, developing close scientific collaboration with other research centres across the world, and, above all, creating a friendly atmosphere in performing research work.

Overcome with emotions, two persons shared with the audience their warm reminiscences on Professor Mięsowicz: Professor Andrzej Białas, the President of the Polish Academy of Arts and Sciences, and Professor Jerzy Niewodniczański, the Chairman of the Polish State Agency for Atomic Energy.

The bronze memorial relief, carved by the artist Leszek Sobocki, was jointly unveiled by the two daughters of Professor Mięsowicz: Dr Maria Rybicka and Professor Teresa Malecka. Numerous physicists from the Academy of Mining and Metallurgy and many researchers from the IFJ attended the ceremony.

The event was mentioned in the media: on June 13, 2003, it was pre-announced in Polish Radio's Program I, and on June 16, 2003, reported by Radio Plus and The Academic Radio ŻAK. On June 17, 2003, the Cracow daily "The Polish Daily" published a longer article by its staff-writer Mr. Marian Nowy, entitled "Jeden z wielkich" (One of the Great).