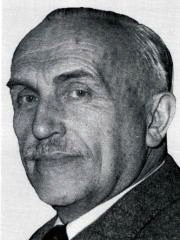 Professor Henryk Niewodniczański was born on December 10th, 1900 in Wilno and died on December 20th,1968 in Cracow.

He graduated in physics from Stefan Batory University (Wilno) in 1924 and two years later he received his doctor's degree from the same University.

In 1927 he was awarded a fellowship at Tubingen University where he worked under professor Walter Gerlach guidance and in 1932 he became an associate professor at Stefan Batory University. At that time his main field of interest were optics of metals and molecular optics. By studying the influence of the magnetic field on the fluorescence of mercury vapour, he proved the atomic nature of the excitation of band fluorescence. These experiments led him to the important discovery of magnetic dipole radiation. He proved the M1 character of the forbidden line in lead (4618 ?) by observation of the polarization of its components in transversal Zeeman effect. This discovery aroused much interest among theoretical physicists and started very fruitful collaboration with the young and talented theoretician Jan Blaton.

In 1934 as a fellow of Rockefeller Foundation Niewodniczański worked in the Royal Mond Laboratory and in the Cavendish Laboratory in Cambridge, which was that time headed by Lord Ernest Rutherford.

On his return in 1937 to Poland Niewodniczański worked for two years at the Adam Mickiewicz University in Pozań and then he went back to Wilno where as professor of Stefan Batory University he was the head of the Chair of Experimental Physics. During the Second World War professor Niewodniczański was engaged in a Physics secret teaching at Wilno Underground University. After the War, in 1946 he obtained the Chair of Experimental Physics at the Jagiellonian University in Cracow.

Professor Niewodniczański always threw all his energy into organizing many scientific research foundations and teaching activities in the field of experimental Physics. Professor's interest in atomic optics and nuclear physics led him to a flourishing development of these branches of Physics in Cracow.

Full of inexhaustible enthusiasm and optimism, he created a group of young scientists who, undaunted by difficult conditions, built with him the necessary equipment and under his inspiration they began research works.

Professor Niewodniczanski was an excellent organizer. In 1952 he took a decision to site in Cracow the U-120 cyclotron, which was ordered in the then USSR, and in 1955 he created the present Institute of Nuclear Physics.

As the Director of the Institute of Nuclear Physics and of the Institute of Physics of Jagiellonian University, Professor Niewodniczanski was the initiator of most of the research carried out in these two institutes. Professor Niewodniczański had many scientific contacts with the outstanding foreign physicists, which were renewed in the first years after the war during his visits to Great Britain, Sweden and Switzerland.

He was abroad several times as a delegate of the High Commissioner for the Uses of the Atomic Energy and as a member of the Scientific Council of the Joint Institute for Nuclear Research in Dubna. Moreover, he participated in many conferences devoted to nuclear physics and atomic optics. He was a member of Polish Academy of Sciences, Polish Academy of Arts and Sciences, Polish Physical Society, Société Française de Physique, Societá Italiana di Fisica, American Physical Society and other several physical societies. He was also a Vice-President of the Committee for Peaceful Uses of Atomic Energy of Polish Academy of Sciences.

Professor Niewodniczański promoted more than forty Ph.D. students of physics. The majority of older Polish physicists had a privilege of starting their scientific work as his students and collaborators. Thanks to Professor's great knowledge, personal charm and strong personality as well as a rich sense of humor he was loved by all who had honor of knowing him.