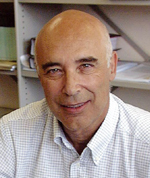 an eminent theoretical physicist. Born in 1941 in Rome (Italy), he complete his PhD in physics in 1965 at the University of Florence. The career path of Dr. Alterelli lead him to New York, first to New York University (1968-69), then to The Rockefeller University (1969-70). In 1970 he returned to Italy to take a faculty position at the "La Sapienza" University in Rome which he held until 1992. In 1980 he became a full professor of theoretical physics at La Sapenza. In 1992 he moved to the newly established University of Rome II ("Roma Tre").

In the period of 1987 to 2006 Guido Altarelli worked at CERN Theory Division, which he headed for two terms, during 2000-2004. Now professor emeritus, he counts among the best known and valued scientists of this institution. He was a member of advisory boards of many leading laboratories, including DESY and CERN. Since 2004 he has been also a member of the Scientific Advisory Board at IFJ PAN.

He published over 200 scientific works, with the most important ones focused on elementary particles and fundamental interactions. He authored classical publications on the Standard Model of quarks and leptons and the predictions thereof. A fundamental quantum chromodynamical equation for the evolution of parton distributions has been named after its discoverers the Altarelli-Parisi equation.