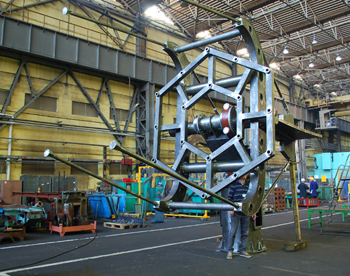 The mechanical structure of the prototype small-size CTA telescope is almost ready. The telescope has been pre-assembled in Ponar-Żywiec factory in mid- October. After performing basic functionality tests at the producer site the structure will yet be de-assembled for painting. It will be installed at the test site in the Institute of Nuclear Physics PAS in Kraków by the end of November. The site work is in progress. Control electronics allowing for basing movement of the telescope is almost completed. The Institute of Nuclear Physics PAN is a member of the CTA Consortium.