The prototype structure of the Small-Size Telescope for CTA has been installed at the Institute of Nuclear Physics Polish Academy of Sciences in Kraków! 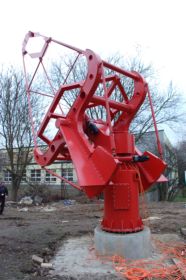 The Cherenkov Telescope Array (CTA) is the biggest astronomical project dedicated to observations of high-energy and very high-energy gamma rays in the energy range from about 20 GeV up to more than 100 TeV. Two observatories (or arrays) will be built, one placed in each of the Northern and Southern Hemispheres, so that the whole sky is covered. Each array will be composed of more than 100 Cherenkov telescopes. To sample the gamma rays in the wide energy range three different telescope types will be constructed: Small-Size Telescopes (SSTs) with 4 m diameter reflector, 12 m diameter Mid-Size Telescopes (MSTs) and 23 m diameter Large-Size Telescopes (LSTs).

The array of small-size telescopes will be dedicated to observations of the most extreme gamma-ray sources emitting in energies up to 300 TeV. This energy range has been unavailable so far for current instruments of gamma-ray astronomy, but it is very important for understanding the cosmic ray acceleration processes. The main limitation for observations at highest energies is due to a much smaller fluxes of high-energy photons compared to the less energetic ones. Because of that the SST array composed of several tens of telescopes will cover an area of several kilometers square, in order to achieve the sensitivity which is sufficient for the observations to be performed.

The team of engineers from the Institute of Nuclear Physics PAS has designed and built the prototype mechanical structure and drive system of the Small-Size Telescope. The telescope has a focal length of 5.6 m, 4 m diameter reflector, and will be equipped with a novel fully digital camera based on silicon photomultipliers.

On November 29th 2013 the prototype of the SST mechanical structure for the CTA Observatory was installed on the test site at the Institute of Nuclear Physics PAS in Kraków. The prototype was produced by the Ponar-Żywiec company. The full control electronics and the monitoring system for the telescope are currently under development at INP PAS. However, before the first observations of the Crab Nebula - the standard candle of gamma-ray astronomy - are possible, the prototype must be yet equipped with the camera, mirrors, and auxiliary systems. The development of these sub-systems is ongoing in the institutions of the Polish Consortium of the CTA Project and the cooperating team from the University of Geneva. The inauguration ceremony for the SST prototype structure is planned in spring 2014. The full telescope prototype will be ready for the first observations at the end of 2014.