Professor. Dr. Andrzej Zygmunt Hrynkiewicz – winner of the Prize of the City of Krakow 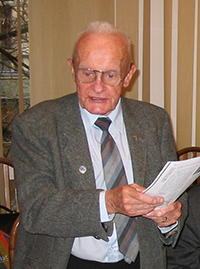 It is with great pleasure to announce that Professor. Dr. Andrzej Zygmunt Hrynkiewicz is this year's winner of the Prize of the City of Krakow in the category of science and technology, which honors the outstanding overall achievements of Professor in the field of nuclear physics.

Announcement result of the competition, and the list of winners combined with the presentation of awards took place on 06/11/2014 at the Palace Wielopolski in Krakow.

The awards are handed in annually by President of Krakow to acknowledge persons in merit in the fields of culture and art, science and technology, and sports. "Krakow has always been a city that does not suffer a lack of individuality; people with their work, praising the work of the city and Poland in the world "- said during the ceremony Mayor of Krakow Jacek Majchrowski.

City of Kraków Award has been added to the long list of awards and honors for Professor Hrynkiewicz. One needs to mention Awards of the President of the Council of Ministers for the overall scientific activity (1996.), Grand Cross of the Order of Polonia Restituta Polish (2005).

Since the establishment of the Institute of Nuclear Physics ,Professor Dr. Andrzej Hrynkiewicz has contributed enormously to the development of scientific research and facilities in various fields , promoting Cracow center as a center of research on a world-wide, global level.

The professor is unsurpassed researcher and university teacher for the whole scientific community, not only in Krakow but nationwide and abroad.

For those interested:
A comprehensive article devoted to the silhouette and achievements of Professor Andrzej Hrynkiewicz, by ed. Lesława Peters, has just been published in the latest issue of Monthly Social and Cultural: "Andrzej Hrynkiewicz. Niecierpliwy profesor", Kraków, nr 11 (121) November 2014, pp. 23-24