In June 2016 r. the Director of the Henryk Niewodniczański Institute of Nuclear Physics Polish Academy of Sciences, prof. Marek Jeżabek signed a new Collaboration Agreement between IFJ PAN and the world's largest high energy physics laboratory, the European Organization for Nuclear Research (CERN). The Collaboration Agreement concerns the participation of IFJ PAN in the international NA61/SHINE experiment at the CERN SPS accelerator. The experiment is looking for evidence of a crititical point of strongly interacting matter, characterizing the transition between „classical” matter and the extreme deconfined state known as the Quark-Gluon Plasma.

Joining this collaboration, we proposed a new research program for studies of electromagnetic phenomena occuring in high energy collisions of atomic nuclei. We expect that the new information on the space-time evolution of these collision obtained from the latter effects will constitute a valuable complement of the original NA61/SHINE research plan. In this context we created a new team of young scientists in the framework of IFJ PAN - says Andrzej Rybicki (assoc. prof.), the team leader. The research program proposed by IFJ PAN constituted an integral part o the new NA61/SHINE proposal of studies of lead-lead collisions, already approved by the CERN SPS and PS Committee for the year 2016. 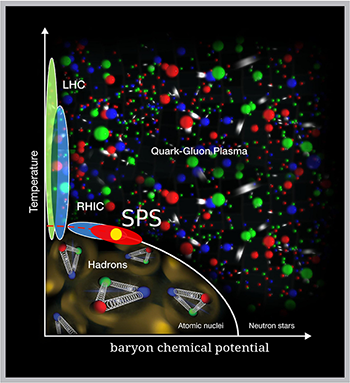 Phase diagram specifying the transition between the „classical” matter (hadrons, atomic nuclei) and the Quark-Gluon Plasma. The critical point of strongly interacting matter is presumably localised in the energy range of the SPS accelerator. (Source: http://shine.web.cern.ch/content/strong-interactions)