The matter-antimatter asymmetry in the Universe still remains one of the unexplained mysteries of nature. Already in the 1950’s Gell-Mann and Pais predicted that neutral particles should undergo particle-antiparticle oscillations, constantly alternating their nature. It makes one of the fundamental predictions of the Standard Model (SM) describing elementary constituents of matter and their interactions. To date, matter-antimatter oscillations have been observed for several neutral particles.

The LHCb Experiment at the Large Hadron Collider at CERN, performed a precise determination of the Bs0-Bs0 oscillation frequency. The strange beauty particle Bs0 is composed of one beauty antiquark (b) bound with a lighter strange quark (s) and, among all oscillating neutral particles observed so far, are the heaviest and have the highest matter-antimatter oscillation frequency. For comparison, even the most similar oscillations of B0-B0 are about 37 times slower. The Bs0-Bs0 oscillations are high enough to allow the particle changing its nature on average nine times before decaying, which corresponds to about 3 million million times per second (3×1012). The very high precision of the LHCb measurement put stringent constraints on beyond the SM models, including those that try to explain observed flavour anomalies in the lepton sector. The result allows also to reduce systematic uncertainties on measurements studying matter-antimatter asymmetry.

The LHCb group of IFJ PAN is directly involved in the analysis with Dr Agnieszka Dziurda being the team coordinator and one of the principal investigators. The very quick oscillations translate into experimental challenges of the measurement which requires reliable identification of the final state and of the initial quark content together with an excellent detector resolution. All the above requirements are met by the first-rate experimental techniques of the LHCb experiment which allowed to reveal this spectacular and fascinating feature of quantum mechanics. 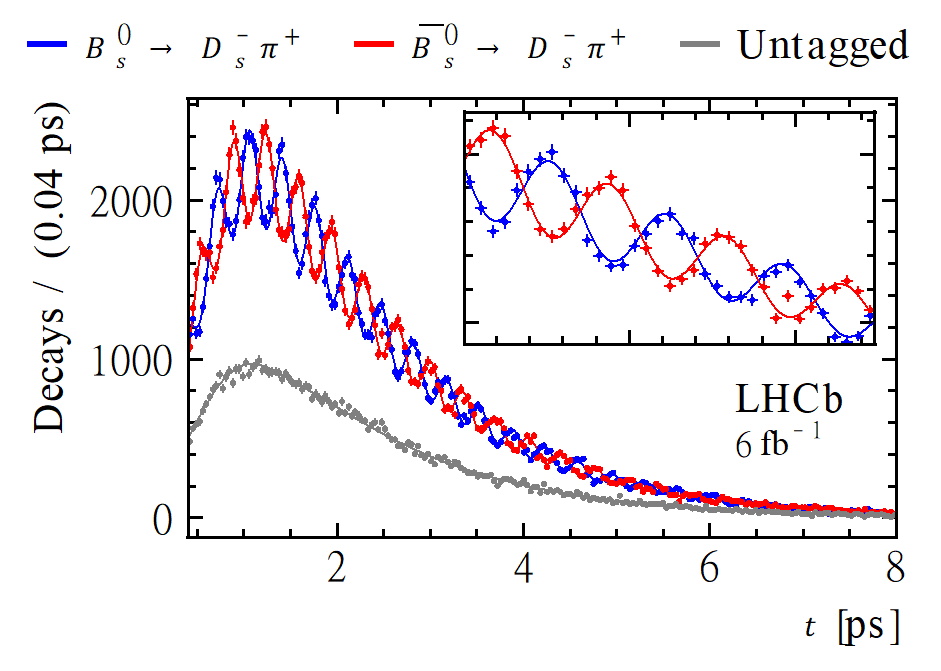