The Henryk Niewodniczański Institute of Nuclear Physics, Polish Academy of Sciences, actively participates in public outreach events, which are organized on a regular and wide scale basis. Some of these events are held annually in collaboration with other scientific institutions. Each year our Institute takes part in the following important outreach undertakings:

Our Institute presents its activities and developments at the annual Science and Art Festival among a number of stands set up by other Cracow research units. The employees of our Institute invite the Festival attendees “to take a journey to the beginning of the Universe”, unshroud the secrets of gravitational waves, dark matter, and black holes, reveal the advantages of proton radiotherapy, and explain how the cyclotron and therapeutic facilities at the Cyclotron Centre Bronowice (CCB) actually operate. They also present the CREDO project, a venture dedicated to the promotion of the idea of cosmic ray detection with the use of smartphones. 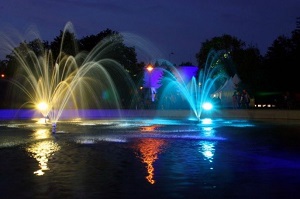 Małopolska Researchers’ Night is by and large the greatest event devoted to the promotion of science in which our Institute partakes. On that particular night several tents are put up on the green premises of our Institute, inside which the achievements and activities of all six scientific divisions of IFJ PAN are presented, including experiments and shows performed before a live audience. All our guests are also invited to take a tour around the Institute, where they can visit our most interesting laboratories along the trail “In the Labyrinth of Science”. Within the framework of the “Science Cinema” program we present a series of popular-science movies, such as: “The Mysterious World of Atomic Nuclei”, “Unraveling the Secrets of DNA” (“Golden Copernicus” award at the Festival of Films for Education 2010, Warsaw), and “Bronowice Chronicle”, produced by dr hab. Jerzy Grębosz, as well as the film “Moving the Horizon”, directed by Wiktor Niedzicki. Each year the Night is accompanied by other interesting events: “The Tricks of Physics” – a show of experiments where nature unveils her secrets, or “Physics for Adults” – a show of R-rated experiments.

Science Picnic of Polish Radio and the Copernicus Science Center

This periodic open-air event for popularizing science is held annually at the National Stadium in Warsaw. Science popularizers representing our Institute take part in the Picnic by hosting such shows as: “Ionizing radiation and its propagation in the environment”, “Transport of contaminants in the environment”, “Accelerate a particle in a particle accelerator”, “A scientific breakthrough? Now it’s your turn – use your smartphone to probe the Universe!” The picnic attendees may also take part in a quiz about searching for invisible radiation, examine masks used in proton radiotherapy at the Cyclotron Centre Bronowice, learn about the therapeutic application of magnets, or expand their knowledge on radiation and its impact on our health.

Picnic of Knowledge in Rzeszów – the Day of the Explorer

The picnic aims at popularizing scientific and technical knowledge in an attractive and public-friendly manner. The representatives of our Institute host a few interactive shows in a spacious tent. They conduct experiments involving such phenomena as plasma, electricity, and electromagnetic radiation, and discuss the fundamental issues of natural radioactivity.

A selected number of our laboratories open up to external guests, who can visit them in small groups throughout the whole of the year. The visitors can choose from among a selection of available laboratories to be visited during a single tour, usually two to three for each group, where they have a chance to listen to half-hour lectures on research conducted in a given laboratory. Starting from 2018, each year we organize Open Days. These events aim to familiarize students with the current offer of our student training programs and diploma theses, and to show visitors around our laboratories, sample preparation labs, and scientific equipment halls (in Divisions NO3, NO5, NO6, Division of Scientific Equipment and Infrastructure Construction, and Cyclotron Centre Bronowice). The tours are accompanied by lectures on scientific work in progress in a given laboratory.

We support various physics competitions, such as Małopolska Physics and Astronomy Competition, dedicated to pupils of elementary and secondary schools, and the Polish nation-wide contest “Chain Experiment”, organized on the initiative of students of the Faculty of Physics, Astronomy and Applied Computer Science of the Jagiellonian University in Cracow, in which we sponsor the awards. We also support the organization of other contests for pupils and students or organize them on our own – such as the contest for a washable tattoo design under the motto “A Tattoo with Physics in the Background”, or “Particle Hunters” – a team competition in which participants detect the particles of secondary cosmic rays and local radioactivity with the use of smartphones equipped with the CREDO Detector application.

Our Institute hosts various shows which enjoy great popularity with children and youth alike. The shows are run by Wiktor Niedzicki – a well-known popularizer of science. For our youngest audience we organize shows entitled “Physics is Super”, in which we present thought-provoking, but also entertaining experiments. On the other hand, the lecture on the history of metrology under the title “A Meter of Problems” is dedicated to older children and youth.

Our own innovative project is the so-called Incubator of Scientific Discoveries (ION), a distributed environment for fostering cooperation of qualified scientific specialists with ambitious, young scientists, mainly graduate and PhD students, who are enthusiastic and willing to discover science. Within the ION program young science enthusiasts have a chance not only to take active part in research carried out by their supervisors – experienced researchers – but they can also put forward and pursue their own projects.

EurekAlert!, a global science news service, is the place where we publish press releases about important scientific achievements which could not have been accomplished without the significant contribution of IFJ PAN researchers and which are reported in prestigious academic journals. Furthermore, we have our own Facebook webpage where we upload information related to e.g. Wiktor Niedzicki’s shows, “A Tattoo with Physics in the Background” competition, press releases in EurekAlert! ect. Our Facebook account is linked with other social services, such as Twitter or google+. Our Institute is also actively involved in the internet service YouTube, which serves as a channel to upload movies illustrating our activities in the field of science.

Last but not least, IFJ PAN scientists are often invited by numerous scientific and cultural institutions to deliver popular-science lectures. We also actively cooperate with the media by publishing posts on popular-science blogs, such as Crazy Science, or by guest starring in TV programs, e.g. Sonda 2 on TVP2.