I obtained master degree at Technical University of Warsaw, Poland in 2009. My master thesis was performed during the Erasmus Programme at the University of Stuttgart, Germany and investigated partial volume effect in diagnostic Positron Emission Tomography. After graduating I moved on to the Doctor Scientiarum Humanorum Programme at the University of Heidelberg, Germany. My PhD thesis focused on optimization of ion therapy of prostate cancer at Heidelberg Ion Beam Therapy Centre and was completed and defended in 2013. During my PhD project I performed clinical work in the Heidelberg University Clinic in the Department of Radiation Therapy and Radiation Oncology and at the Heidelberg Ion Therapy Center (HIT). After the PhD I dedicated one year to work in the clinical routine of photon therapy obtaining the medical physics expert qualification (Fachkunde & Fachanerkennung). Since 2015 I have been a postdoctoral fellow of Rome section of National Institute of Nuclear Physics (INFN), Italy and have worked with Applied Radiation Physics Group (ARPG) of Sapienza University of Rome. My INFN project focused on the analysis of charged secondary radiation produced by 4He, 12C and 16O ion beams. These measurements have been performed to support development of a dose profiler detector designed for ion beam therapy range monitoring. From January 2017 I am employed as a researcher in the Institute of Nuclear Physics (IFJ) PAN in Krakow. Currently, in my projects I perform GPU- accelerated Monte Carlo simulations to improve radiobiological modeling and to develop range monitoring methods for proton beam therapy. My projects are performed in collaboration with international research partners. In 2017 I was awarded by two national research grants: Reintegration of Foundation for Polish Science, Lider of National Centre for Research and Development, as well as Marie Sklodowska-Curie Actions Seal of Excellence award. 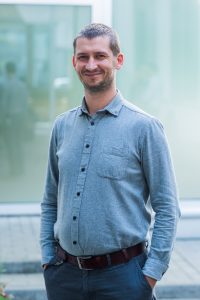 In 2007 I graduated from University of Science and Technology in Faculty of Physics and Applied Computer Science (Nuclear Physics specialization). During my studies I focused on electronics and mainly on extracting and shaping signals from particles detectors. Next I started PhD studies in Nuclear Electronics and Radiation Detection Group lead by prof. Władysław Dąbrowski on Faculty of Physics and Applied Computer Science. I joined the International Linear Collider group supervised by prof. Marek Idzik. During PhD studies I was participating in designing ASICs for Forward CALorimeter for ILC. I was designing, simulating and testing analog front-end and Sample and Hold circuits.
Up to May 2009 I worked in International Laboratory of High Magnetic Fields and Low Temperatures (Polish Academy of Science) in Wrocław as an assistant of prof. Wiktor Niżankowski. I was preparing new experiments and taking care of existing equipment used in very high pulse magnetic fields experiments. I was mainly designing, programming and fabricating new measuring equipment using microcontrollers and discrete electronics.
In 2010 I was working in Mechanical Equipment R&D Centre Limited Company as Electronics Designer. My responsibilities were designing and testing microcontroller based electronics, as well as mounting and testing the electronics in the Armoured Fighting Vehicle.
In 2010 I started PhD study at Institue of Nuclear Physics Polish Academy of Science in Kraków. During the study I was a scholar of Foundation of Polish Science in frame of International PhD Study program. In 2016 I defended a PhD thesis entitled “Development of two-dimensional thermoluminescence dosimetry system for Quality Assurance in ion radiotherapy”.
During PhD study, in 2014, I was employed as a physicist in Bronowice Cyclotron Centre in Kraków. I war participating in start-up and acceptance tests of two gantry therapeutic rooms with scanning proton beam. Then I was responsible for preparation of quality assurance tests.
From 2017 I am working at Institue of Nuclear Physics Polish Academy of Science in Kraków as researcher, taking part in two projects concerning range monitoring in proton therapy.

From October 2012 to July 2017 I was a student at Faculty of Physics University of Warsaw (Warsaw, Poland), field of study Applications of Physics in Biology and Medicine, specialization Medical Physics. During working on my master thesis titled Determining the optimal parameters of the modulator for proton and carbon therapy I was using a GATE software package to simulate the irradiation with proton and carbon ion beams.

In summer 2016 I participated in the HGS-HIRe Summer Student Program at GSI Helmholtzzentrum für Schwerionenforschung (Darmstadt, Germany), where I joined a Biophysics group to carry on the research about application of heavy ion therapy for non-cancer diseases. The study included simulations of treatments to cure the cardiac arrhythmia by irradiation of heart tissues with carbon ions.

At the begging of the academic year 2016/2017 I took part in research project at Maria Sklodowska-Curie Memorial Cancer Center and Institute of Oncology (Warsaw, Poland) with the aim to test a new ArcCheck phantom for radiotherapy. The title of the project is: Method of single-isolated errors analysis for ArcCheck.

I completed my Master Degree in Medical Physics (Dosimetry and Electronics in Medicine specialization) at AGH University of Science and Technology (Cracow, Poland) in 2015. My Master’s thesis was entitled PET/CT imaging in the neck lymphoma therapy evaluation.

In the following half a year I worked on clinical aspects of Magnetic Resonance Elastography (MRE) and statistical data evaluation at University of Rzeszow (Rzeszow, Poland).

I moved to Australia at the end of 2015, where I started an internship at Monash Biomedical Imaging (Melbourne, Australia). As a part of the Imaging Analysis Team, I was responsible for managing the technical aspects of positron emission tomography (PET). I lead the development of novel brain attenuation correction techniques and PET reconstruction on Siemens PET/MR mMR scanner. Furthermore, I was involved in the evaluation of a new PET data reconstruction method – PRESTO – developed by the Forschungszentrum Jülich in Germany.

At the beginning of 2018 I have enrolled PhD study at the Institute of Nuclear Physics (Cracow, Poland) as a part of a InterDokMed study. The scope of my thesis is development of the innovative PET for range monitoring in proton beam therapy. Currently, my work focuses on the Monte Carlo simulations (GATE software) in order to validate the feasibility of the modular JPET for clinical applications. Experimental works towards optimize the proposed system are planned as well.

More information about my experience, knowledge, abilities and projects I were involved in, can be found on Linkedin profile.

I completed my Master Degree in Physics at Pedagogical University of Cracow (Internet technologies and their applications in physics specialization) in 2013 and at Jagiellonian University (experimental physics specialization) in 2014. My first master thesis was focused on studies of the physical properties of barium titanate (BT) and hafnium barium titanate (BTH), while in my second master thesis I was investigated properties of signals in plastic scintillators with different shapes.

I have started PhD studies at Jagiellonian University in 2014. The main aim of my thesis is the determination of performance characteristics of the J-PET tomograph what is necessary in order to check if the J-PET detector can be used in clinical application at hospitals.